If you talk about OEE (Overall Equipment Efficiency) with a group of people who are involved in production, very rarely will you encounter anyone who does not have an opinion about OEE. The vast majority know more or less what it is, and many work with OEE in one form or another.

But they do this in the same way many of us will prepare a meal every now and then. Only very few of us are world-class chefs.

Things are similar with OEE. There is a big difference between being able to say how OEE is calculated and what the OEE-value for your own production is, on the one hand, and actually using OEE as the fantastic tool it is, on the other.

If you want to explain what the OEE-value for something is, the quickest and most straightforward explanation is that it is a performance indicator that describes the efficiency of a production resource.

If you want to explain what the OEE-value actually is for something and how you work with it in practice to enhance the competitive edge and long-term profitability of a production organization – well, you will need a little more time. This is what I intend to devote this article to.

Lean production is based on the assumption that the business environment is constantly changing. The competition changes, the materials change, machines change, staff change, and regulations and laws change. Everything changes all the time, over both the short term and the long term.

The option of “standing still” therefore does not exist. So you cannot insist you are satisfied with the situation you are in and then expect to retain the same conditions into the future. This in turn means that a person who does not respond to the changes will be in a worse situation, despite the fact that they themselves have not changed.

OEE-measurements are a lean production tool for identifying the short and long-term effects of internal and external changes on the efficiency of production resources. 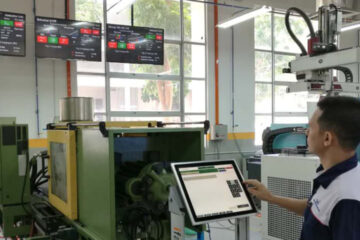 Global beverage Brand reduce quality losses by 68% using Machine OEE software “Machine OEE is one of the most profitable investments we have made in production. By being able to minimize deviations and maximize our Read more…